How Will XPS Foam Board is Produced?

The rigid thermoplastic material called XPS foam board actually is made of polystyrene. This polystyrene that can be a certain synthetic hydrocarbon polymer made from the petroleum products benzene and ethylene.

XPS foam boards can be commonly used for both above-grade and below-grade insulation applications, e.g. ceilings, walls, attics, and roofs, and also foundations and basements. It can prevent thermal bridging and also improve energy efficiency when used above the ground.

A brief history about XPS

This material, which has exceptional insulating qualities, was first utilized as blocks of unsinkable high buoyancy in six-person navy lifeboats. Its use was extended later to a few other watercraft types due to its ability to offer good thermal insulation and buoyancy. Its use in construction dates back to the 1950s when it was known as Styrofoam.

First, the closed-cell polystyrene foams have been utilized for insulating cold storage units in the building sector. Because of its higher compressive strength, our floors can also be insulated, removing the need for truck or freight traffic restrictions.

Following the flooring, the material began to appear on the roofs as well. Due to high solar radiation and considerable heat fluctuation, the flat waterproofing is constantly put under extra strain.

Dow made it quite clear which product was meant for which purpose by using expressive names. Roofmate, Floormate, Agmate, and Perimate were born due to this.

The blue foam landed on the European mainland in 1963 after crossing the Atlantic Ocean. It was first exclusively offered in Europe, but colourful thermal insulation boards were introduced in 1964.

Between the years 1964 and 2000, hundreds of factories were built throughout Europe, resulting in a dramatic increase in both consumption and also production capacity. Dow used expressive names to make it obvious, which product was meant for what use. As a result, Roofmate, Floormate, Agmate, and Perimate were born.

After traversing the Atlantic Ocean, the blue foam landed on the European mainland in 1963. It was initially available only in Europe, but in 1964, colourful thermal insulation boards have been released. Hundreds of factories were created across Europe between 1964 and 2000, resulting in a dramatic growth in both consumption and also production capacity.

Production of such XPS foam board 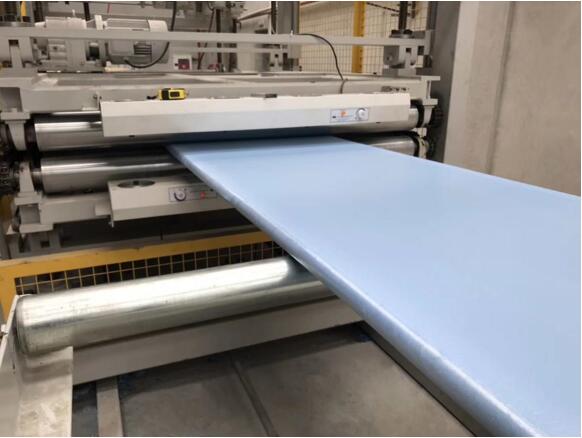 An automatic feeder feeds polystyrene resin, combustion aid, nucleating agent, and other materials into this first-stage plastic extruder. This is mostly a plasticizing stage.

Before injecting an environmentally-friendly CO₂ foaming agent, the raw ingredients and auxiliary materials will be thoroughly plasticized in this extruder. In the second-stage extruder, the blowing agent will be fully mixed with a few other raw materials, properly cooled, and extruded then through the die.

During the majority of the second stage, foaming, secondary mixing, and cooling process will take up.

The pressure is soon released once the die will be extruded, your foaming agent that is wrapped in the plastic expands swiftly to create closed cells, and the polystyrene plastic makes a foamed panel along with honeycomb-shaped cells.

The shaping plate is then moulded using a shaping tractor to achieve the desired thickness and width, after which it can be cut to shape. This stage primarily regulates the board's breadth and thickness.

Feininger created on its own the production line for equipment for XPS extruded board, consistently enhancing and refining product performance.

XPS extruded insulation boards of Feininger have a wide range of specifications and physical features, and it has been universally recognised and praised by users.

As we saw, this XPS foam board will be a long-lasting material that can also be melted and again used for making new products. It is an energy-efficient product that saves significantly more energy than it consumes during production.

Using XPS foam board, which has an initial R-value with five per inch, can dramatically reduce the energy required to cool and heat the structure. This contributes to the preservation of the natural resources.

Most of the fundamental characteristics of this "green" building material may be found in XPS foam board. It is energy-efficient, environmentally friendly, has good thermal and water-absorption resistance, and is long-lasting up to fifty years. It also saves natural resources because it is a man-made material.

However, not all XPS foam product aspects are eco-friendly. For one thing, dyes are commonly used to colour XPS foam in order to distinguish it from other brands. Depending on the colour used, it may or may not be detrimental to the environment.

Extruded manufacturing processes employ blowing agents that can damage the ozone layers and contribute to our global warming. Hydro-chlorofluorocarbons (HCFCs) are commonly used as a blowing agent in XPS foam board.

During the production process, the blowing agent can penetrate the XPS cells. The blowing agent eventually can diffuse out of these cells and leak into the environment, a process known as "ageing." Few manufacturers have started employing environmentally friendly blowing agents, although this is not a standard practise across the board yet.